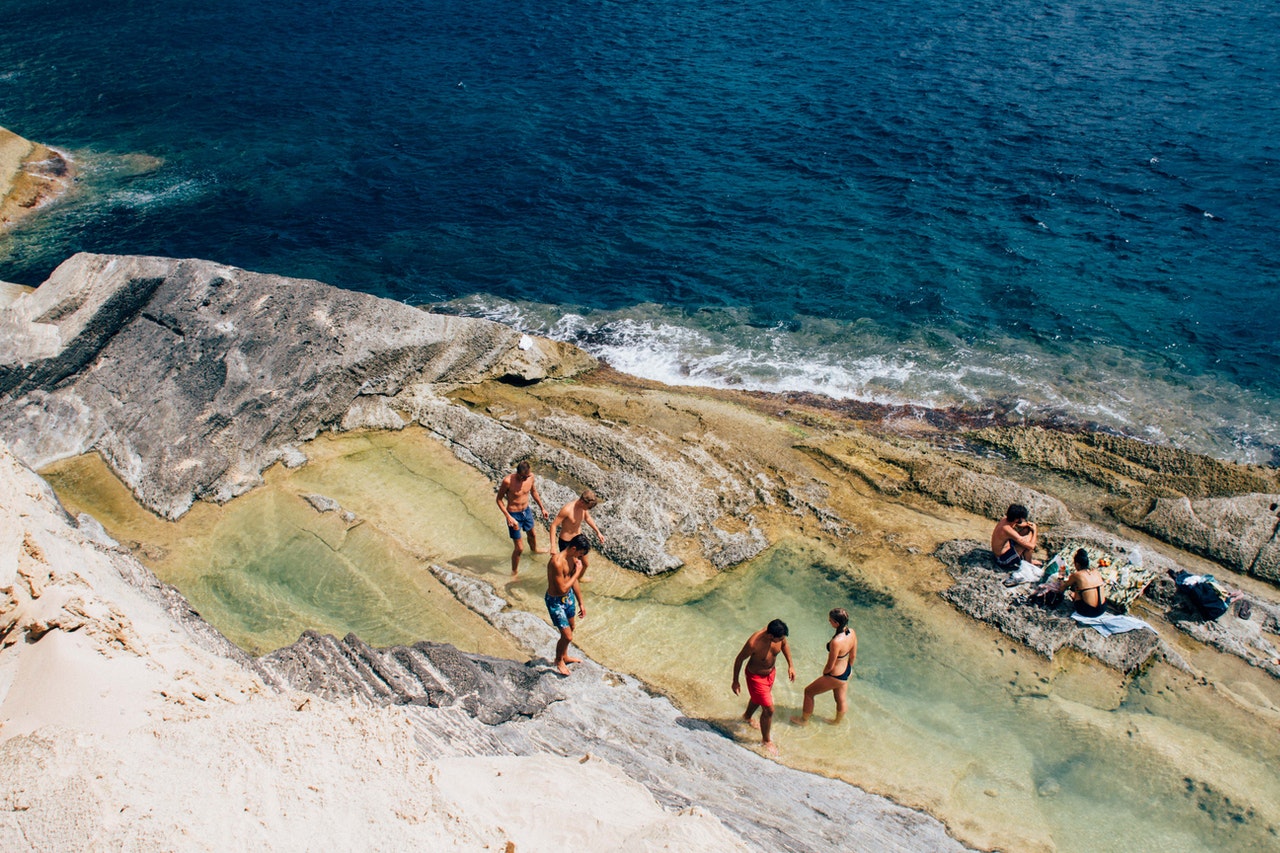 Just because one summer hotspot is popular doesn’t imply you’ll like it. If you’re planning a summer vacation to Spain, knowing which beach is appropriate for you and your travel companions can help elevate your trip from good to extraordinary. These destinations offer the complete experience, from San Sebastian’s famed Playa de La Concha to Andalusia’s warm southern coast. Here are seven choices of the best beaches that you will love should find yourself in Spain.

Located at the Bay of La Concha in the Basque Country, San Sebastian, La Concha Beach is perhaps one of Spains most popular beaches. Its name comes from the characteristic crescent, or seashell, the shape of beautiful Kontxa Bay (the Basque word kontxa, or concha in Spanish, translates as seashell).  The beach has crispy  golden sand. La Concha beach is close to the city centre, you’ll find many restaurants, shops, and accommodations within walking distance.

Situated in the north-east corner of Spain, near the western end of the French border, San Sebastián is a chic coastal city with excellent pintxos (think tapas, but Basque) and one of the nicest beaches you’ll ever find in a city.

There’s plenty happening on and around La Concha Beach, too, so if you’re looking for even more adventure than a typical beach vacation, San Sebastian is a great destination. You can easily ​​find hotels in and around San Sebastian that are within walking distance of La Concha, too.

Popular with locals and international visitors alike, San Sebastián’s emblematic seashell-shaped La Kontxa ranks as one of the most famous urban beaches in the world, rivaling the likes of Copacabana in Rio de Janeiro and Barceloneta in Barcelona. Named for the characteristic crescent, or seashell, shape of beautiful Kontxa Bay (the Basque word kontxa, or concha in Spanish, translates as seashell), La Kontxa is centrally located in the Spanish Basque Country’s food lovers’ capital of San Sebastián.

The beach, which boasts just under a mile of white sand, is incredibly spacious, and, although it attracts everyone from residents and tourists to families with small children, elderly couples, and groups of friends, it very rarely gets packed–even in high season. Sheltered from the elements by Urgull hill on one side and Igueldo hill on the other, and facing Santa Clara island across a short stretch of water, La Kontxa’s water is nearly always calm, making this an ideal spot for swimming, paddling, and sunbathing.

Every summer, the beautiful people of Europe flock to the tiny Balearic island of Formentera to luxuriate in its crystalline waters and frolic on its uninterrupted white powder-sand beaches backed by dunes and pine trees. Only accessible by ferry or private boat from its significantly more crowded island neighbor, Ibiza, Formentera is a popular destination for a day-trip—or longer, if you can

afford it. While every corner of Formentera screams exclusivity, the chicest spot of all is Platja de Ses Illetes, which forms part of the Ses Salines National Park and offers some of the most exquisite virgin sand on the island, despite its proximity to the main port at La Savina. The beach attracts its fair share of glitterati, as celebrities tend to stop off here for lunch and a swim, while their luxury yachts casually bob up and down on the horizon. And with water so brilliantly turquoise and sand so luminously white it is bound to make your jaw drop, Platja de Ses Illetes easily qualifies as one of the most show-stoppingly stunning beaches not only in Spain but in the world.

This is the beach that all the other beaches have got a secret crush on. It’s got it all: dazzling white sand, sparkling turquoise water, and a gourmet restaurant scene that guarantees a good meal (salt-baked fish is the local specialty). In the height of summer the crowds come to play, so get there early to secure your own spot. Oh, and by all means get your suit off — it’s encouraged.

Perhaps you’re familiar with the madhouse that is the Spanish island of Ibiza, one of the world’s prettiest isles — and most notorious party destination. If you’d like to experience Ibiza’s postcard-perfect setting without the ruckus, head to Formentera, Ibiza’s equally pretty but far more tranquil neighbor.

The finest gem in Formentera’s crown is undoubtedly Playa de Ses Illetes, a silky stretch of blinding white sand flanked by turquoise seas. Ses Illetes has gained a deserved reputation as the hangout for the fashion set. After a wild night on Ibiza, the sexy crowds don microscopic swimwear and head to Illetes to recover. The beach lacks fancy amenities like beach clubs, lounges or showers, but is home to a handful of beach bars and restaurants.

Just off the eastern coast of Spain, the Balearic Islands are home to some of the most popular vacation destinations in the country including Ibiza, Mallorca, and Minorca. However, the island of Formentera was rated the best island for beaches by Viajar in 2015, including Ses Illetes and Cala Conta.

Though the beaches are better on Formentera, the nearby (and larger) island of Ibiza tends to be more active. Formentera is an easy day trip (by ferry) from Ibiza Town, or you could book a hotel on Formentera itself if you’d rather stay overnight to catch a beautiful coastal sunrise.

This bay on the north coast of Spain has got more drama than an episode of Dallas — silvery sand and stones sweep around a sheer cliff face, backed by verdant meadows. The calm, high-vis water makes it a prime spot for snorkeling — just watch out for the rocky ground underfoot

As with Galicia, sunshine is not as certain in Asturias as it is in other parts of Spain, but you can still find some affordable hotels in nearby Cudillero if you’re looking to explore the region and take in a bit of culture on the cloudier days.

Asturias is a popular destination for the younger crowd, and its major cities s

Asturias is a region in northern Spain also on the Atlantic coast. The beaches here are white, sandy, and clean, surround by rocky cliffs. Playa de Torimbia is a stunning, secluded beach, close to the port of Llanes, west of Bilbao. It’s a raw beach, with no shops or food, but it does have lifeguards on weekends during the summer season, and showers are available.

It’s accessible by car, although parking can be difficult during the summer, or you can walk here from the village of Niembro. Aside from the beaches, it’s a great area for sightseeing as it was an important part of both medieval and Moorish Spain. The Hotel Miracielos is close to Niembro in Barro, which has a few nice beaches of its own

The “beach of silence” is well-named since, being fairly remote and tricky to reach, it doesn’t get many visitors. Those who do make the long drive and the careful descent down stone steps to the beach itself are treated to a really beautiful spot. The cove is ringed by an amphitheatre of rocky cliffs and, with the rocks continuing into and under the water, it’s a great spot for snorkelling. Sadly, the beach is more pebbles than sand, but it’s worth visiting for the view and the peace.

When you’ve got a killer hangover and last night’s bass still thumping in your skull, Cala Salada is the remedy your body is crying out for. The water has an almost lagoon-level of calmness, and the cove is secluded enough to keep away the masses, so you needn’t worry about the dreaded LOUD NOISES. Take a dip in the cool blue water, or go big with a jump straight from the cliffs. The old-school beach café serves a moreish seafood paella — just make sure you’re in a fit enough state to keep it down.

Given that Las Arenas literally translates as “the sands,” it goes without saying that Valencia’s most famous beach has been blessed with some pristine golden powder. Originally named Playa de Levante or Playa del Cabañal, it later became known as Las Arenas because it was home to the ultra-exclusive Balneario Las Arenas spa, which opened in 1898 as a healing center for wealthy Spanish families who came here to take wave baths. The water is calm and shallow, making it suitable for swimmers of all ages and abilities, as well as windsurfers and sailors. Meanwhile, the wide, busy promenade that runs alongside the grand beach is packed with bars and restaurants. Don’t miss an opportunity to try one of Spain’s national dishes of seafood rice, or paella, originally conceived here in Valencia, even though purists will argue that a true paella Valenciana should actually contain chicken or rabbit and green beans, rather than shellfish. Try both versions and make your own mind up at La Pepica.

Barcelona is Spain’s second largest city and it sits right on the Mediterranean coast. The coastline in and around the city is lined with beaches. Bogatell is within the city limits but less crazy than the city’s main Barceloneta beach. Bogatell, a man-made beach, was created for the 1992 Olympics, so it’s well-designed and clean. There are lifeguards on duty and basic facilities (bathrooms and showers) every few hundred yards along the beach. It’s a wide, flat beach with coarse, brown sand. The Ibis Styles Barcelona City Bogatell is a good mid-range choice in the area. It’s a 10-minute walk from the sand. Locals also enjoy Castelldefels. This beach is 20 minutes by train from downtown Barcelona, and right across from the train station. It has miles of wild beach, but still plenty of tapas places and beach shacks for food. It’s also popular for swimming as well as wind- and kitesurfing.

Even though Barceloneta is the best known of Barcelona’s city beaches, Bogatell is the beach of choice among locals in the know. Why? Not only is it less crowded than tourist-heavy Barceloneta, but it is also cleaner and less popular with local pickpockets. The downside, meanwhile, is that it requires a slightly longer trek from the city center. Whereas Barceloneta is an easy 20-minute stroll from La Rambla and the Old Port of Barcelona, Bogatell will take you an extra 15 minutes on foot (or five in a cab). But once you get there it is well worth the hassle, with cleaner water, considerably more space, and far better facilities (read shorter lines for the public toilets).

For amazing travel eSIM deals while you plan your beach trip to Spain, click here.